“The original level-headed plan had been to plant 2.5 acres behind the hotel on my own property. However an identical size piece of land to the west beckoned me for two reasons.

Firstly it had been established with five meter tall almond trees which blocked the panoramic view; and secondly it had a gentler slope and would accordingly be easier to establish.

There was only one snag, I only owned about a quarter of this precious little parcel of land. So amicable negotiations with Andrew Just and his family resulted in a long term lease being established.

I was determined to make everything as difficult as possible. Thirty four rows, not one with the same length as another. Four different varieties with cuttings taken from ten different vineyards. I traveled the countryside in the middle of winter taking cuttings from some of my favorite wineries.

My rationale was not to try and emulate their wines, but to at least start off with vines that had a story that was meaningful to me. Consequently vines were sourced and planted in spring of 1999.

The summer of 2000 was one of the most ferocious on record with mean maximum temperatures in January and February being 3.1 degrees above normal.

February had 18 days with maximum temperatures above 30 degrees. And Sellicks Hill had plenty of hot gully winds! Along with Cuculiobeetles and dehydrated, hungry kangaroos, conditions weren’t ideal for establishing a new vineyard.”

That was the establishment phase of the ‘initial’ vineyard. These vines will produce 1.5 to 2.0 tonnes per acre.

Four years later, the ‘upper’ vineyard was planted on a much steeper slope in harsher soil in the spring of 2003. I expect this vineyard to produce even less fruit; perhaps in the order of 1.0 – 1.5 tonnes per acre. It is an even, rectangular planting behind the hotel. Once again I braved the elements with two muddy golden retrievers in tow during some pretty stormy winter days to take most of the cuttings from really great vineyards in the Barossa Valley and McLaren Vale. The Viognier and Graciano were both sourced from the “South Australian Vine Improvement” group.

The combined plantings from both vineyards can be seen in a much simpler format as follows: 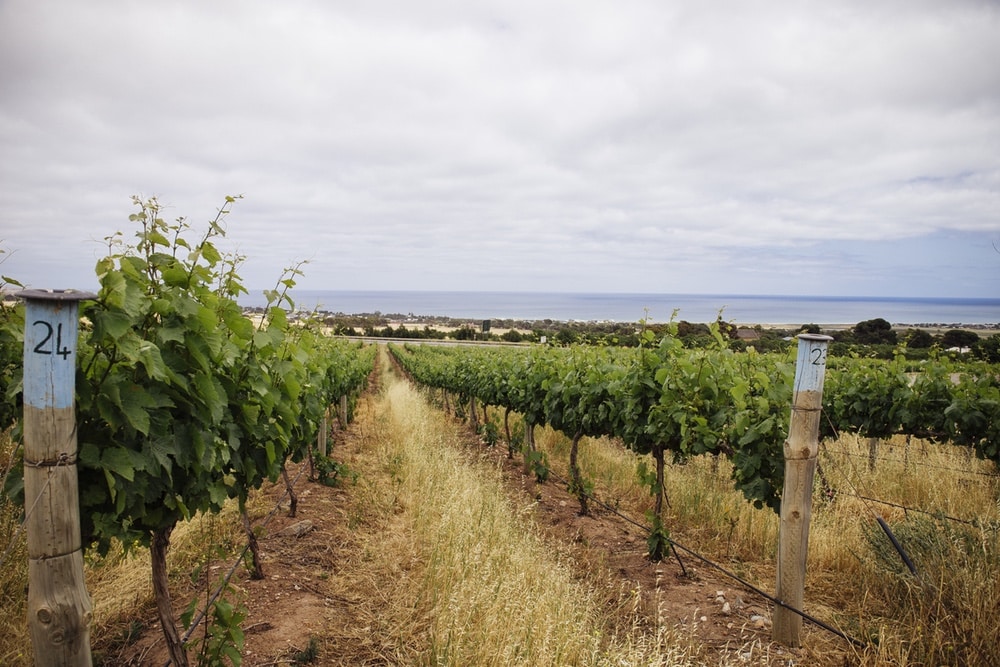 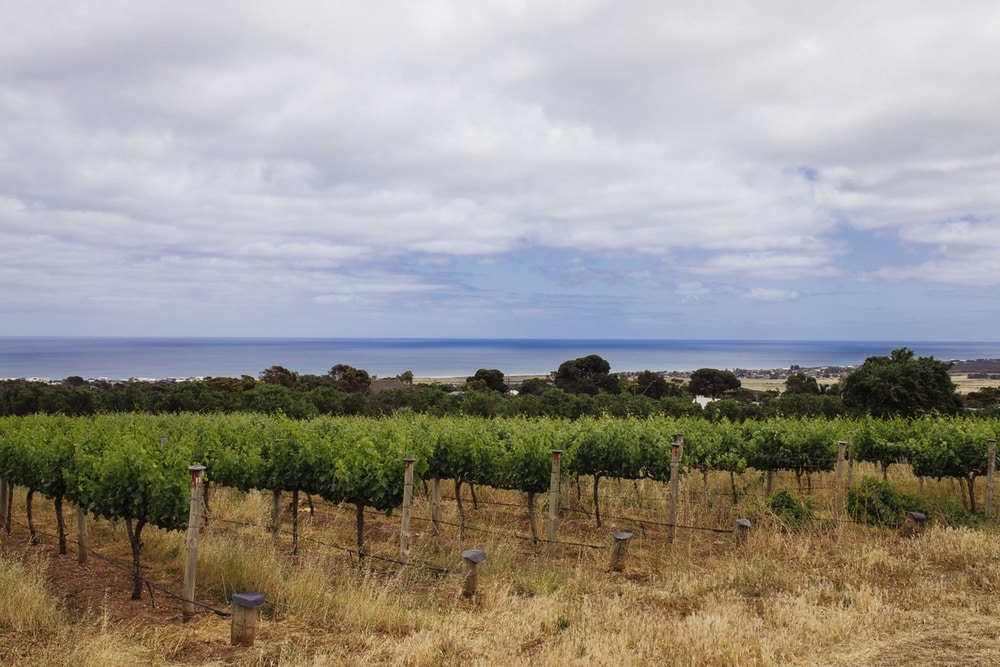 The two “Rudderless” vineyards have a unique combination of 6 varieties that you will not find collectively anywhere in South Australia. Perhaps no-one has been crazy enough to plant them in concert. So the blending permutations that Justin and I will be confronted with in the winery will be remarkable. Let’s have a look at why I chose them:

McLaren Vale and Shiraz; they’re in sync. That’s really all there is to it. It’s also one of our most popular drinks and consequently easy to sell!

Graciano is primarily a Spanish variety where along with Carignan and Tempranillo, it is an important component in the appellation wines of Rioja and Navarra. It is a relatively low yielding variety with small, thick skinned berries which are not very juicy. Wine from Graciano is strongly coloured, rich in tannin and extract, and ages well. Duncan and Susana from Cascabel Winery kicked off my interest in Graciano. I’m taking a punt with this variety, but I have a positive feeling that it should do really well on my windswept upper vineyard.

The secret to Grenache is low yields. If not cropped too heavily, it can make a terrific varietal wine, there are many great examples coming out of McLaren Vale. The initial vineyard has 288 vines on trellis and the upper vineyard is planted with 324 bush vines.

This is a variety that can be found predominantly in France, Chile and Argentina. Traditionally used as a blending grape in Bordeaux, Malbec is relatively scarce in South Australia, being found principally in Langhorne Creek, and the Clare Valley. This is another variety that I am convinced can produce something really special from the soils of the Rudderless vineyard.

On many occasions, Mataro alone can give wines which are rather neutral in flavour and for this reason the variety has not been very highly regarded in Australia. The gentle, western sloping initial Rudderless vineyard site is ideal for ripening Mataro. We will produce a very small quantity of a straight Mataro varietal wine and use the remainder for blending.

Viognier is an old variety restricted to the right bank of the Rhone River south of Vienne in France. In the appellation Cote-Rotie it is blended with Shiraz to add perfume to the red wine. I have planted two rows for this purpose.”